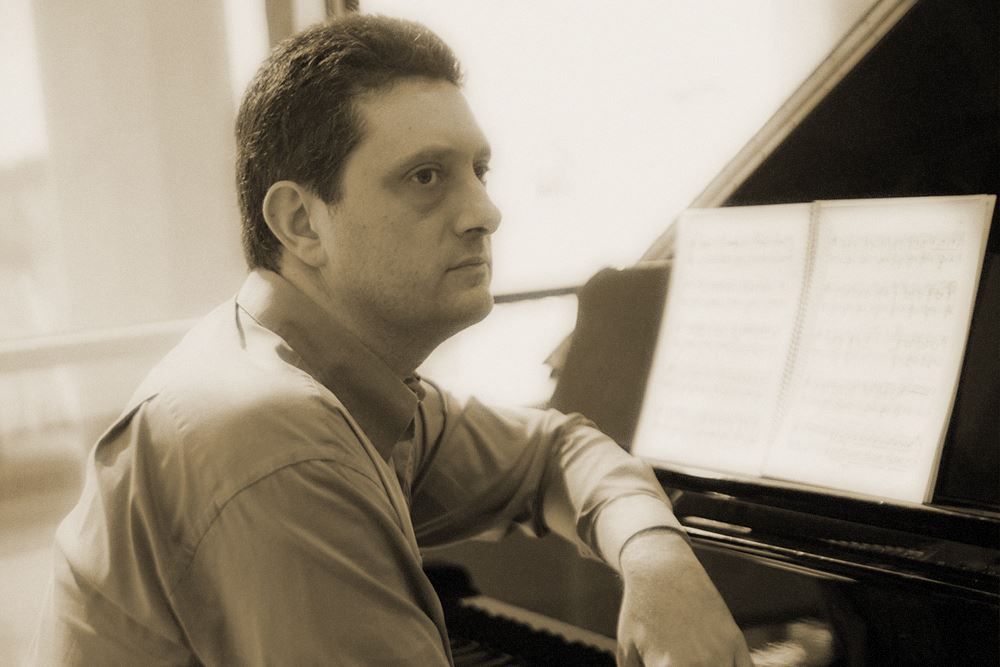 He made his musical training at the Conservatories of Valladolid, Superior of Madrid (piano, classical accordion, counterpoint and composition with Manuel Carra, Elio Boschello, Daniel Vega and Antón García-Abril, respectively) and Scuola of music “Luciano Fancelli” of Venice.

He has made recordings for radio and television; has in its possession 27 CDs edited and distributed by the labels RTVE Música, Fundación Autor, Banco de Sonido, Record label of the RCSMM and, mainly, Tunes in which it grants a preponderant role to Spanish music, highlighting the integral ones of Guridi (complete work for singing and piano), Spanish music for piano four hands (Joaquín Rodrigo’s integral), along with Juan Manuel Consuegra, Spanish music for cello and piano (three volumes), along with Eduardo del Río and Zarzuela in camera format (sextet with piano) (10 volumes to date), with the Ensamble de Madrid.

In his concert and record career, his interpretation of the Suite Iberia by Isaac Albéniz in the National Music Auditorium in Madrid commemorating the centenary of his death (2009) deserves a special chapter, having taken it to the CD in 2004 with great critical success (He was chosen “The album of the week” in “The cultural” of “The world”) and DVD (2014, first recording in this format of the complete work, with the seal QTV). Also it is possible to emphasize its integral recording of the “poetic and religious Harmonies” of F. Liszt, presented in the great Red Room of the Teatros del Canal (Community of Madrid), the integral of the choral organs of Bach transcribed for piano by Busoni , or Debussy’s First Prelude Book.

He has been a repeating teacher of the Teatro Real de Madrid in the seasons 1997-1998 and 1998-1999, collaborating with Plácido Domingo, Jaime Aragall and Joan Pons, among others. He has participated in the premiere of works such as the opera Divinas Palabras by Antón García-Abril, Ballet La Celestina by Carmelo Bernaola, and De verborum et speculorum ludis by Cristóbal Halffter.

He regularly collaborates with the Madrid Symphony Orchestra since 1999 and has performed, among others, with the National Orchestra of Spain, Orchestra of the Community of Madrid and the RTVE Orchestra. He has performed chamber music with groups: Ensamble de Madrid, of which he has been a member since 2000, Modus Novus, Cámara XXI, various chamber groups of the RTVE and OSM Orchestra, Ibero-American Ensemble, etc. and with interpreters like Pedro Corostola, Marçal Cervera, both professors of the prestigious “Música en Compostela” Course, a course in which he has been collaborating as a pianist for 20 years.

He is currently a full professor of the Professional Conservatory of Music “Joaquín Turina” and has held a chair in commission of services in the RCSMM since 2003.

“Huidobro makes the listener forget his mechanical ability to seduce him with his vibrant musicality. In a way, it combines the pulse of Sánchez, the flight of Orozco and the naturalness of Alicia. Nothing is free and everything has logic and rationale in his expressive fingers. “Justo Romero.